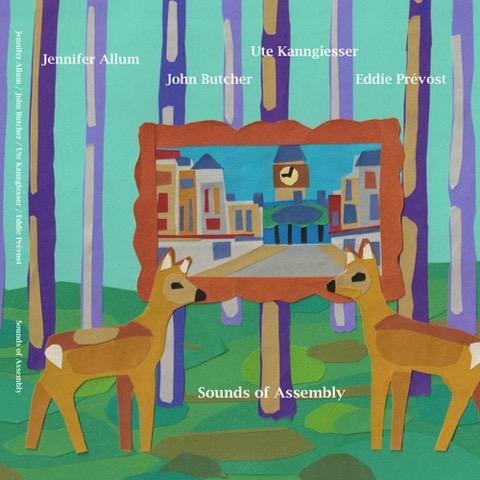 This recording marks the second meeting of this quartet. The occasion was an afternoon session organised for inclusion in Stewart Morgan's film "Eddie Prévost's Blood". A special location had been chosen - the large assembly hall of Prévost's old senior school, Addey & Stanhope in Deptford, London, where he enrolled in the mid 1950s. Coincidentally, a dozen years later John Butcher began senior school a few miles further up the Thames in Bermondsey, the neighbourhood of Eddie's childhood home. Ute Kanngiesser and Jennifer Allum met each other and Eddie when, over a decade ago, they became regular attendees of his long-running weekly music workshop in Southwark. The track titles are borrowed fromJoyce Carey's Thames-side descriptions in his novel "The Horse's Mouth".

When music is improvised, philosophy matters. While contrasting conceptions can lead to some intriguing contests of sound and will, it can also lead to dialogues of the deaf. And while complete agreement can lead to music short on spark, a consensus about what’s important can ensure that the music makes some sort of sense. The quartet that made Sounds of Assembly works in the area of philosophical commonality, and makes from it a sound world well worth settling into.